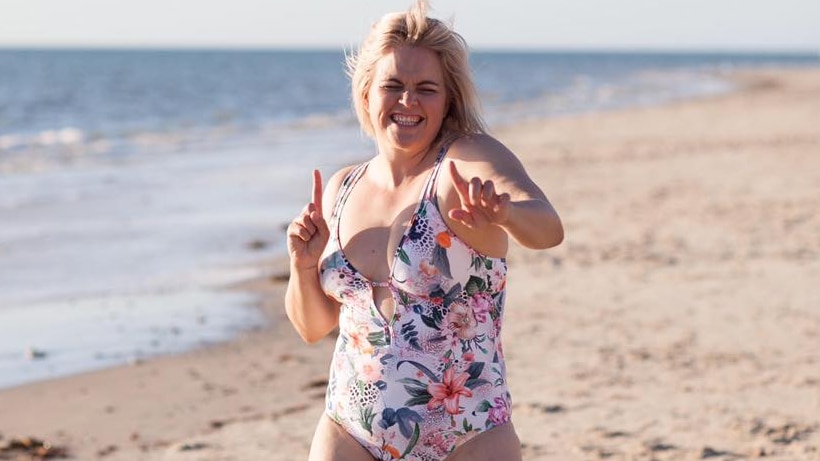 Australian of the Year for 2023 Taryn Brumfitt is on a mission to stop children growing up to hate their bodies.

The South Australian body image activist and documentary maker was last night named Australian of the Year at a ceremony in Canberra for her decade-long campaign to encourage women and children to embrace their bodies.

She said children started off believing their bodies were strong and powerful, before changing their minds.

“It’s getting younger and younger I have to say, I only spoke to a six-year-old recently who was dieting,” she told ABC Radio presenter Sarah Macdonald on Thursday morning.

“We really need to help our kids across Australia and the world because the rates of suicide, eating disorders, anxiety, depression, steroid use, all on the increase related to body dissatisfaction.”

The 45-year-old mother of four wants to give children an “armor” to protect themselves from the messages from the diet and cosmetic industry and social media.

“We can prevent any child growing up with a dysfunctional relationship with their body because we weren’t born into the world hating our body,” she said.

Not all the blame lies with social media, she said, but rather the choices people made about the accounts they followed.

She urged youths to follow accounts that inspired them to be better people, instead of focusing on appearance.

Ms Brumfitt said parents needed to lead by example, even at times they felt unhappy about the way they looked.

“Even if you have to fake it until you make it, or just not saying anything in front of your kids about your body, we really need to help them to move and nourish and enjoy and respect their bodies by role modeling positive body image behavior ” she said.

The photo that started the movement

It has been 10 years since Ms. Brumfitt’s unconventional “before and after” photo gained global attention.

In the “before” photo she stands on stage in a bikini for a bodybuilding competition. She is smiling, but Ms Brumfitt said it was at that moment she realized the hours of daily exercise and restricted eating had not made her happy.

“My ‘after’ is as I am now, cellulite, stretch marks, folds, rolls, all the things,” she said on Thursday.

The reverse before and after photos were seen by millions.

“Which is crazy in itself right? A woman learns to embrace her body, and it becomes headline news in most countries around the world,” she said.

She used the attention to launch her body image movement and make the documentary Embrace to encourage women to be positive about their bodies.

She has since turned her focus to children, releasing the documentary Embrace Kids last year and co-authoring a guide for parents.

‘Not about promoting obesity’

To counter trolls who seized on her photos, calling her lazy and fat, Brumfitt ran a marathon. Then she ran another one to raise money to make her second documentary.

What critics of the body positivity movement misunderstood was that shame and self-hate are not motivating, she said.

She believed people with a better appreciation for their bodies were more likely to take care of them by being physically active, eating nourishing food, and even wearing sunscreen.

“This is not about promoting obesity. Keeping weight and that number on the scales out of our mind is going to do us good,” she said.

Ms Brumfitt doesn’t use the word exercise when she talks about her weekly activities.

“I move my body every day because it makes me a better person … but there’s no rules around it. Some days I go to the gym, some days I do yoga, some days I hike, some days I swim,” she said.

Men are not immune from dysfunctional relationships with their bodies.

In Ms. Brumfitt’s conversations with men and school-aged boys, they have told her about their worries about going bald or not having big enough muscles.

“It’s often suppressed. They’re not sharing their thoughts, but there’s a lot that’s holding them back as well,” she said.

“I think we all need to be part of this conversation when it comes to body image. It’s not just for women, it’s for everybody.”

After the success of the documentaries for women and children, she now plans to make one focused on men.

However, as Australian of the Year she said her focus would be on children.

She has accelerated her plans to reach children in schools from one million in three years to one million this year.

“It’s going to be the kids that say, ‘Hey Mum and Dad, don’t talk about your bodies like that,'” she said.