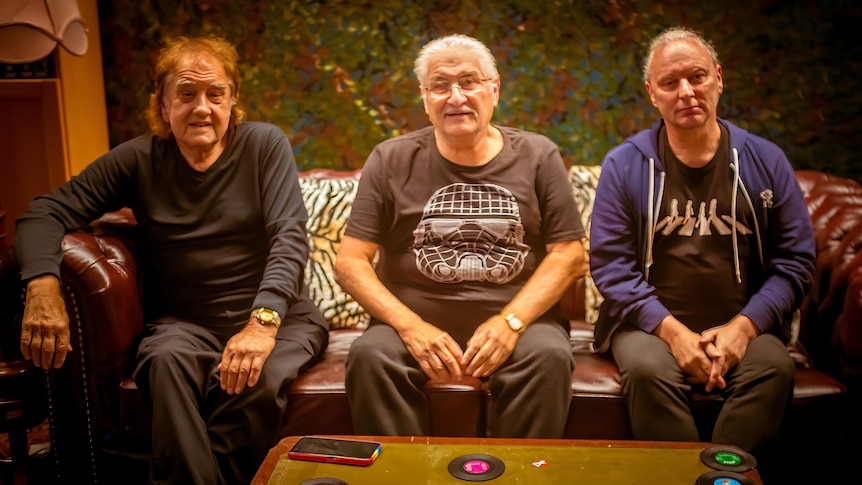 It was 1961 and two boys from Maroubra Bay High in Sydney were talking after school.

One is Peter Hood, the drummer in a new band called The Atlantics.

The other, Jim Skiathitis, is an up and coming guitarist who sings songs like Sweet Sixteen at parties.

They chat for a while, until Hood suddenly asks a question that sounds more like an ultimatum. Could Skiathitis learn barre chords on his electric guitar? And if he does he can then join the band.

Telling the story this week 60 years on, as The Atlantics release their latest album, Still Making Waves, Jim Skiathitis laughs at the memory: “I said I could, of course … in fact, it took me a couple of weeks to do it and it wasn’t easy.”

But did they immediately have the sound we now associate with The Atlantics — of echo-drenched guitar making fans think they were surfing, with perfect waves breaking on an endless beach? Well, not quite, Skiathitis says.

“As we got better instruments — like our Fender guitars and amps — we did. At first, we covered songs by bands like The Shadows from Britain. But then we started writing songs. Peter Hood and I had this affinity for writing songs together. “

Better still, the crowds that turned up to see them liked what they wrote.

“It was exciting, we had our share of screaming girls, we were a powerful band, no pussy-footing,” Skiathitis says. “We were loud and different from other bands. We were more forceful.”

Playing live and playing in the studio to make a record are two very different things. CBS, though, were confident the band could make the transition and gave them a contract.

Skiathitis can still remember what it was like going into the studios for the first time. “Scary,” he says, laughing loudly. “For young guys, being in the studio was exciting but there was pressure. You had to play live and record it and mistakes were a big no-no.”

Their first single was well received — well enough for the record company to allow them to record a second single. Their choice of song was crucial the second time around. That song was Bombora, a surging surf instrumental.

Taking its subject matter from the growing surf craze and its title Bombora from the Indigenous word for a submerged rock that sits out of the line-up, making waves break in bigger surf, it immediately grabbed producer Sven Libaek’s attention.

The track quickly established itself in the top 40 then kept going all the way to number one. It stayed there for eight weeks. Then, in a move that stunned the band and the record company, audiences overseas heard it and loved it. In response it was released in Japan, the Netherlands, the United Kingdom and New Zealand. It even charted in Italy. Suddenly The Atlantics were Australia’s first international rock act.

Today, Bombora is considered one of the top five surf guitar tracks ever.

“We were a different sound,” Skiathitis says. “The American bands used reverb units, we had echo units. It’s very different sounding. We had a stronger sound than many bands.”

The Atlantics were different in another way, too. Not surprisingly given their Greek and European backgrounds, their compositions had a different feel. Fans and critics felt they heard the sound of the bouzouki in Skiathitis’s playing and the feeling of eastern Europe in his compositions with Peter Hood.

“I think it was just in-built,” he says. “I think everything I wrote had the sound of the East, with those minor chords. It was in our upbringing. Perhaps not all of the songs but quite a few.”

There was, however, a drawback to being migrants in Australia during the 60s. “We got a lot of the old ‘wog’ thing, it was rampant in those days,” Skiathitis says. “We were all Europeans, of course, and we weren’t everyone’s cup of tea or flavor.”

Their next song, The Crusher, did almost as well as Bombora. Their fourth single, called War of the Worlds, was an attempt at a sci-fi opera. It was a bold move, taking them out of the surf, and not all the fans liked it.

But then came The Beatles with their voices, inventive songs, different chord structures and three-part harmonies. The impact on potential audiences was profound.

“When the Beatles arrived, everything changed … we discovered we could sing. It was easier to adapt to what people wanted and we ended up a covers band,” Skiathitis says.

The evolution of the ’60s could have been The Atlantics’ death knell. It wasn’t. The band morphed and in a masterstroke engaged a singer called Johnny Rebb. He could sing up a storm and Peter Hood delivered the perfect song for him, called Come On.

The track delivered an impassioned vocal that encapsulated the sound of lust and longing that 55 years on, still sends shivers up and down your spine.

As Skiathitis recalls, it didn’t sell big at the time but as the years rolled by, Come On became one of rock music’s greatest “garage” tracks, played by other artists and included in the ground-breaking Down Under Nuggets Collection.

A twist of fate, an unexpected revival

As the ’60s became the ’70s, music changed again. Singer-songwriters were all the rage and “glam” rock was just around the corner, along with disco. In 1971 The Atlantics stopped playing and recording. Band members found other things to do and, except for a brief re-union in 1987, that’s the way things stayed until the late 1990s.

Enter guitarist Martin Cilia. An accomplished musician, he had grown tired of current musical trends like techno and dance music. Instead he decided to make a guitar-centered solo album based on the kind of music he liked. What he needed was a bass player and, in a curious twist of fate, the man he had in mind was Bosco Bosanac, formerly of The Atlantics.

“I went into his record store at Annandale and said, ‘I’m going to make this album, would you like to play bass on a few tracks?’ I then gave him a cassette,” Cilia says.

A few days later he had his reply. Bosanac said he didn’t want to play on Cilia’s recording but could he play live — would he be interested in joining The Atlantics? “I said, ‘Are you serious?'”

Cilia was interested but suggested they get together and see if the chemistry worked. “It was like we had been together forever,” he says. “The next thing you know we had made an album called Flight of the Surf Guitar — that’s what brought the band back.

Jim Skiathitis says he, too, felt the energy and the rapport immediately — that Cilia had “rejuvenated” the band.

‘People were genuinely excited that we were still going’

The revival Martin Cilia inspired also happened to coincide with a revival of longboard surfing and a desire to go retro. Suddenly, The Atlantics had many of their old fans and a whole new bunch of supporters.

Bombora was played at the closing ceremony of the Sydney Olympics in 2000. Then, in 2006, when David Minear from Bombora Records and producer Kerryn Tolhurst wanted to record and film a concert in the Freshwater surf club to showcase the history of surf music, the the first people they asked were The Atlantics.

Freshwater was the first place in Australia where a surf board was ridden and the country’s greatest surf band didn’t let him down, with a searing version of Bombora that became the centerpiece of the concert.

Suddenly, people were listening not just here but across the globe. “I was shocked at how we were known in different countries,” Skiathitis says. “People were genuinely excited that we were still going.”

The band’s latest release, on January 26, includes only one track with original drummer Peter Hood, who sadly passed away in 2021. Still, the album doesn’t stray too far from the sound they pioneered. The first track is called Surfing the Wedge, in reference to a break at Newport Beach in California. If you close your eyes you can feel the sun, the pounding surf and the smell of salt in the air.

“It was great fun,” Skiathitis says of his 60-year ride. “There were things we didn’t do when we should have and, regrettably, there were some casualties along the way. But I’m just really pleased that we left an impression on the world.”