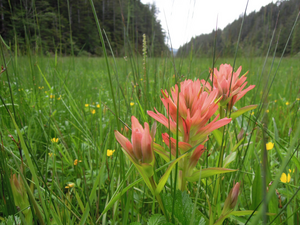 Nutrients from salmon carcasses can substantively alter the growth and reproduction of plant species in the surrounding habitat, and even cause some flowers to grow bigger and more plentiful, SFU researchers have found.

Their study, published today in the journal Royal Society Open Science, is the first to demonstrate a connection between salmon and coastal plant growth and reproduction. The work extends what has previously been known about a nitrogen isotope that is found in some plants and animals in the ecosystem and has been generally attributed to the nutrients from salmon.

It also sheds light on the bigger picture of how the impact of climate change on the rivers and streams traveled by salmon could help inform ecosystem planning and management.

During a three-year field study, researchers experimentally added pink salmon carcasses into the estuary of a small river in Haíɫzaqv (Heiltsuk) territory on BC’s central coast. The area features a large meadow of grasses and wildflowers.

“Following our experiments, we found that some species of wildflower grew larger leaves where a salmon carcass was deposited, and in some years, some species grew larger flowers or produced more seeds,” says PhD biology student Allison Dennert, who led the research. working with SFU biology professors Elizabeth Elle and John Reynolds.

The team undertook similar experiments using drift seaweed rockweed, which provides a different set of nutrients. They also experimented with a combination of rockweed and salmon carcasses, and a control, then examined their impacts on four common wildflower species, including silverweed, yarrow, Douglas’ aster and common red paintbrush.

Researchers found that the addition of salmon carcasses led to larger leaves, particularly in yarrow and common red paintbrush, and a larger seed set in yarrow in the third year.

“Understanding the interconnection between ecosystems is incredibly important to our knowledge of how to protect them,” says Dennert, who also works with the Raincoast Conservation Foundation.

“Currently, lands and waters are managed under separate provincial and federal jurisdictions. Scientifically and management-wise, we think of the land and sea as separate and unconnected entities. This work furthers the idea that ecosystems don’t exist in isolation, and that what happens in one can influence the other.”

Dennert was among researchers who found thousands of decaying salmon in a dried up river in the Heiltsuk Nation last summer. “In some areas on our coast,” she notes, “we’re rapidly losing salmon biomass and the ocean’s connection to life on land.”