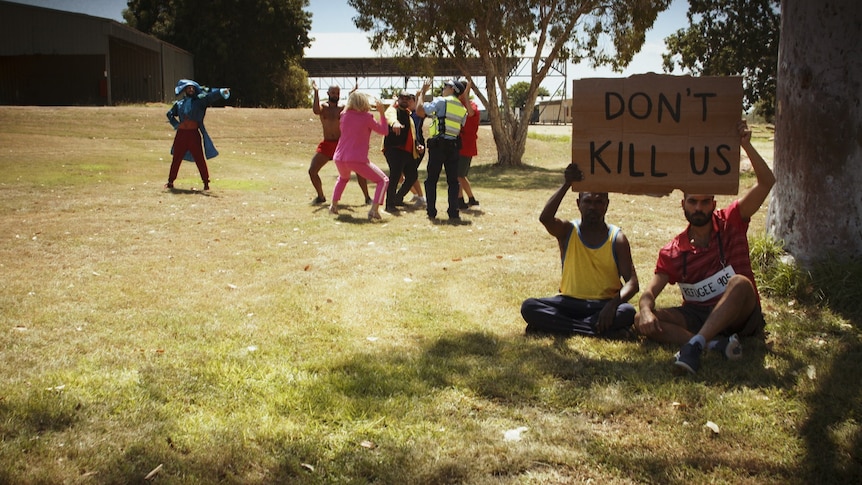 On a blisteringly hot day in a dry field in Bunuba country, Western Australia, Noongar rapper Beni Bjah, clad in the colors of the Aboriginal flag, points at the camera and slings lines that land like slaps:

Look how you’re killing us

Locking our children up

Filling them prisons up.”

The original cut through the pop culture noise with its mix of searing lyrics and images of slavery, gun violence and police brutalitywrapped in the playful veneer of a pop song.

The Australian version, produced by Indigenous intercultural dance theater company Marrugeku, focuses on incarceration — from the abuse and deaths of First Nations people in prisons (including youth detention centers Don Dale and Banksia Hill) to the indefinite detention of asylum seekers.

Kids as young as 10 — the age of criminal responsibility in WA — appear in the video, dressed in Don Dale uniforms.

“Those young children could be in the juvenile justice prisons,” Rachael Swain, co-artistic director of Marrugeku, told ABC RN’s Stop Everything!.

In the lead-up to January 26 (known as Invasion Day or Survival Day to many Indigenous Australians, as well as other members of the community) and against the backdrop of ongoing debate about the Indigenous Voice to Parliament, the company and artists involved hope the video not only resonates with Australian audiences but leads to positive action.

“We’re depicting some really key moments in our own history that hurt like hell, that break our hearts, that we live every day.

“[But] this is what art is — it’s to provoke dialogue and these kinds of responses from us as artists, but also from the people who view them.”

The company released the clip on YouTube in December, to mark United Nations Human Rights Day, and “to speak to our own communities to say, ‘We’re with you.’ We are trying to say [in the video] the same things that people have been crying out [about] day-in, day-out for so long,” Pigram explains.

“Not much has changed in this country. Look at the Aboriginal deaths in custody: Some 30-odd years later (after the 1991 royal commission), things are worse. So how are we actually addressing these things? And when will we see this change that we’re all waiting for?”

‘A nation of jailers’

The seed of This Is Australia was planted back in 2018, when Swain showed Pigram the video by Childish Gambino — aka Donald Glover.

“I was blown away with the artistic way of connecting some of the issues that were going on for America in a really clever way — through music, dance, the mediums that we [Marrugeku] often used to tell stories,” Pigram recalls.

Glover had made the backing track available for people to download and make their own versions — which led to remixes from other countries, including This Is Iraq, This Is Nigeria and This Is Brazil.

Swain and Pigram started to work on their version in 2019, bringing on Perth-based rapper Bjah, who traveled to Sydney (where Marrugeku is partially based, alongside Broome) to work on the lyrics in collaboration with the dancers.

He tells ABC Arts: “Because we had so many issues to touch on as First Australians … the song pretty much wrote itself.”

But work on the video ground to a halt during the pandemic — and instead, the song became a part of Marrugeku’s dance-theatre work Jurrungu Ngan-ga [Straight Talk]which premiered in Broome in 2021 and is playing at this year’s Adelaide Festivalbefore touring to Black Swan Theater Company of WA.

Jurrungu Ngan-ga explores “the way Australia locks up that which it fears”, in Swain’s words — particularly focusing on the experiences of asylum seekers and First Australians.

The work was informed by discussions with Yawuru Elder and senator Patrick Dodson, with whom Marrugeku regularly collaborates, in the wake of the shocking Don Dale report on ABC TV’s Four Corners, in 2016.

“We were talking about … the psyche of Australia and how we have this in-built knee-jerk reaction to lock away things that are difficult for us,” Swain recalls.

“And he (Dodson) talked about us being a nation of jailers, from colonial times [onwards].”

In April 2022, a month after the WA border reopened, the stars finally aligned to film This Is Australia — in Fitzroy Crossing, dancer Emmanuel James Brown’s country (and the site of recent record-breaking flooding).

Marrugeku were touring Jurrungu Ngan-ga, and it was the first time the company’s dancers had all been in one place since the pandemic began.

They shot the clip over three 40-degree-plus days, with Bjah and lead dancer Luke Currie-Richardson sweltering in a woolen coat and pants respectively — a nod to convict uniforms.

The kids in the clip include members of the Fitzroy Crossing community — a collaboration only possible because of the company’s longstanding relationship with the area.

“During the filming, you could feel the community was with us,” says Pigram.

“They loved the vibe of what it was saying and what it was standing for… [They were] proud that we chose to shoot it in Bunuba country.”

‘Aussie day is due’

When Donald Glover was asked about the intention behind This Is America, he said: “I just wanted to make a good song, something that people could play on the Fourth of July.”

Pigram would like people to watch This Is Australia on January 26, and reflect on the treatment of First Nations people and refugees in this country. The video opens with the lyrics:

“We just want a barbie

Crack a can or two

put upon your thongs

Aussie day is due.”

“If our video prompts those conversations that I know are growing and building as we approach and as we pass that particular date… [and if] we can keep talking about it, we might get somewhere, and one day feel proud to be in this place that we share,” says Pigram.

Bjah says: “I would like everyone to see it [on January 26] just because what we’re trying to bring to the forefront here … is the systematic racism and the institutionalized racism that is embedded in Australian society.

“We’re trying to bring it to the forefront so people know that we need to start making changes at the base of the constitution. And hopefully later on this year, people will vote ‘yes’ to give a voice to parliament for Indigenous peoples , which I think will be a great step forward.”

Pigram says the Indigenous Voice to Parliament is something she’s been hoping for too. With that in mind, she’s “hoping people will watch this video, listen to the lyrics, feel something and act on it”.

“[But] it’s about time people start hearing us and feeling us and listening to us and standing with us, and hopefully that will create new pathways forward.”