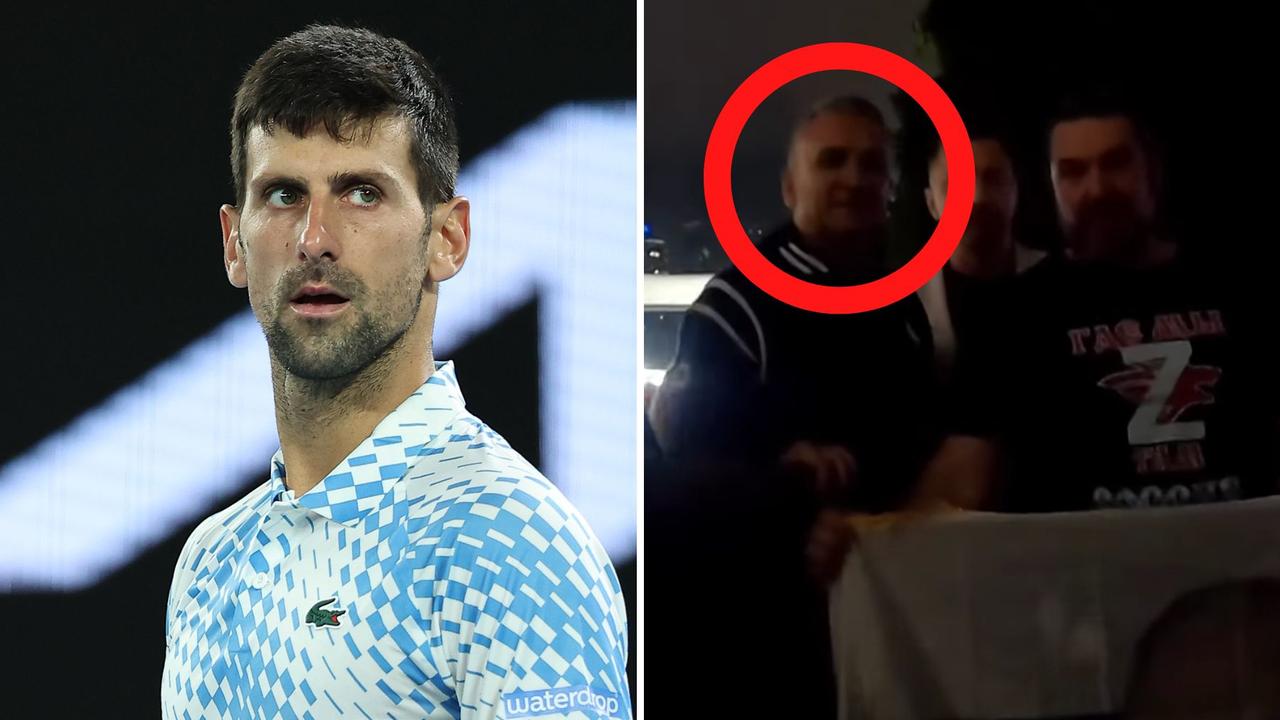 In footage uploaded to a pro-Russian Australian YouTube account on Thursday, Srdjan Djokovic is seen standing alongside a man who is holding a Russian flag with President Vladimir Putin’s face and wearing the pro-war “Z” symbol associated with support of the Ukraine invasion .

In the footage, Srdjan Djokovic was warmly greeted by the group of pro-Russian protesters – four of whom were earlier expelled from Melbourne Park by the police after reportedly threatening security.

Before departing, Djokovic Sr appears to say “zivejli Russiyani”. Živeli means ‘cheers’ in Serbian and is derived from an expression wishing ‘long life’, with Russiyani referring to the Russian people. Reports therefore translated the full phrase to mean “long live the Russians”.

Simeon Boiko, whose YouTube channel posted the footage, on Wednesday night called for Russian fans to ‘strike back’ at Tennis Australia for banning Russian flags and pro-war symbols.

“Today Djokovic plays Andrey Rublev. I hereby appeal or instruct everyone to get down there. I can confirm that we’ve got some surprises,” Boikov said.

“Tennis Australia brace yourselves… for fans, for people who love tennis, if you know what I mean. I’ve got to say it that way or they’ll get me for incitement. We’ve got a lot of serious fans in Melbourne heading down.”

“The Russian empire has had its flag banned. Well guess what Tennis Australia? Good luck when the empire strikes back.”

During Djokovic’s victory over Russian opponent Andrey Rublev at Rod Laver Arena, a patron in the stands was spotted taking off one shirt to reveal another with the prohibited “Z” symbol.

The man was seen covering his shirt with a jacket after being spoken to by an Australian Open official – but was not expelled from the Arena – before Novak Djokovic unwittingly signed another shirt held out by the fan following the straight sets 6-1, 6- 2, 6-4 victory.

Former Ukrainian star Alexander Dolgopolov – who has returned to Ukraine to fight in the conflict – called for a life ban for the fan.

After the match, a group of patrons were seen waving banned Russian flags and chanting “Serbia, Russia” near the stadium. Other chants included references to Validimir Putin and Ukrainian regions targeted by the Russian invasion.

Tennis Australia confirmed four spectators had been spoken to by the police following the incident.

“Victoria Police intervened and are continuing to question them. The comfort and safety of everyone is our priority and we work closely with security and authorities.”

A Victoria Police statement confirmed: “Police spoke to four men after a Russian flag was produced on the steps at the tennis court about 10.20pm on Wednesday 25 January. All four men were evicted.”

Russian and Belarusian players have been allowed to compete in this year’s Australian Open as independent neutrals, forbidden from representing their countries.