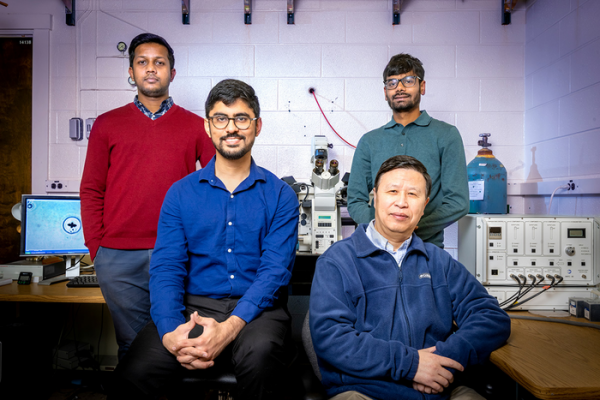 Newswise — CHAMPAIGN, Ill. — Scientists have developed a tiny mechanical probe that can measure the inherent stiffness of cells and tissues as well as the internal forces the cells generate and exert on each other. Their new “magnetic microrobot” is the first such probe to be able to quantify both properties, the researchers report, and will aid in understanding cellular processes associated with development and disease.

They detail their findings in the journal Science Robotics.

“Living cells generate forces through protein interactions, and it’s very hard to measure these forces,” they said Ning Wanga professor of mechanical science and engineering at the University of Illinois Urbana-Champaign who led the research. “Most probes can either measure the forces actively generated by the tissues and cells themselves, a trait we call traction, or they can measure their stiffness – but not both.”

To measure cell stiffness, researchers need a relatively rigid probe that can compress, stretch or twist the tissues and quantify how robustly they resist. But to measure the cells’ own internally generated contractions or expansions, a probe must be relatively soft and supple.

Like other scientists, Wang and his colleagues had already developed probes to measure each of these qualities individually. But he said he wanted to develop a more universal probe that could tackle both at once. Such a probe would allow a better understanding of how these properties influence diseases like arteriosclerosis or cancer, or how an embryo develops, for example.

To tackle this challenge, Wang and graduate student Erfan Mohagheghian looked for ways to alter the mechanical characteristics of a probe after injecting it into the tissue of interest. They used hydrogels made of polyethylene glycol, a material already approved for use in human subjects.

For the new study, the team developed a precise method for embedding a magnetic “microcross” into a rigid PEG hydrogel. Study co-author Kristi Anseth, a professor of chemical and biological engineering at the University of Colorado, Boulder, had already developed a method to degrade and soften the hydrogel using ultraviolet light.

In a series of experiments, the researchers injected their probes into 3D lab-grown tumor masses and into zebrafish embryos. By subjecting those tissues to an electromagnetic field, the scientists activated the probes to exert various stresses on the tissues and measure tissue stiffness. Exposing the tumor mass or the embryos to UV light then softened the PEG matrix of the probes, allowing the probes to measure the forces generated by the cells within the tissues.

The probes gave precise information about both the tissue stiffness and traction, revealing for the first time that while malignant tumors may become stiffer in response to surrounding tissues, the cancer cells do not alter their tractions, regardless of their proximity to soft or stiff materials. Wang said this challenges a common perception that the physical characteristics of the underlying tissue drive changes in the internal forces of cancer cells, allowing them to metastasize.

“People thought that the stiffness of the substrate was the driving force for the cancer to progress,” Wang said. “Our findings do not support this claim.”

The probes also captured the push and pull of cells during embryonic development, which could offer new insight into how such oscillations correspond with the patterning of organs, tissues and limbs as animals develop from single cells into complex tissues, Wang said. The embryonic work was conducted by researchers at the Chinese Academy of Sciences and the Huazhong University of Science and Technology in Wuhan, China.

“We believe the large force oscillations detected in the embryos are very important in driving the early stages of development,” Wang said.

Wang also is a professor of bioengineering and an affiliate of the Carle Illinois College of Medicinethe Beckman Institute for Advanced Science and Technology and the Carl R. Woese Institute for Genomic Biology at the U. of I.